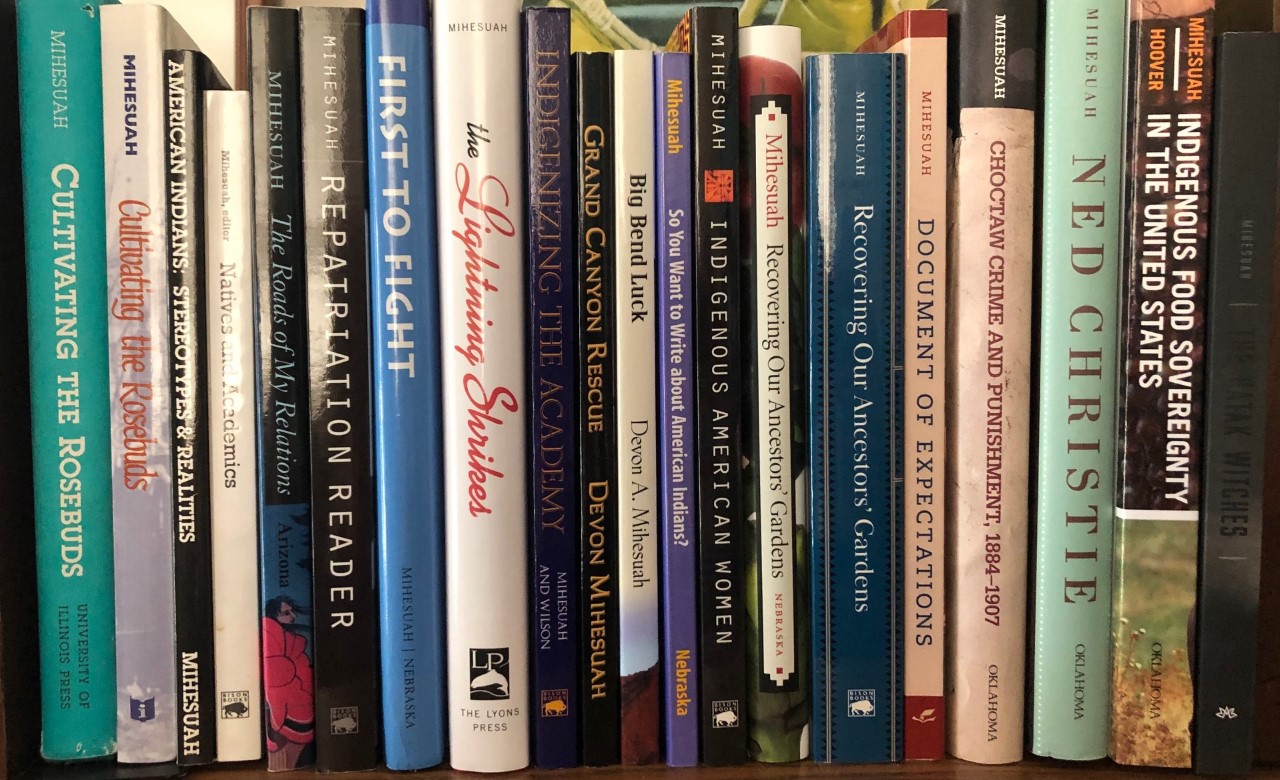 Devon Mihesuah is an enrolled citizen of the Choctaw  Nation, a historian and writer, and a previous editor of the American Indian Quarterly. She is the Cora Lee Beers Price Professor in the Hall Center for the Humanities at the University of Kansas. She is the second Native woman to receive a named/distinguished professorship (the first is Henrietta Mann). She is on the Board of Directors of the Lawrence Memorial Hospital Foundation and the  Scholars Advisory Panel of the National Women’s History Museum.

Mihesuah has written many books and articles about colonization, boarding schools, stereotypes, research methodologies, Indigenous women, AIM, repatriation, racism, “fake news,” and violence, slander and libel against Natives, in addition to award-winning novels. She manages the American Indian Health and Diet Project http://www.aihd.ku.edu/ and the Facebook page, Indigenous Eating. She regularly speaks nationally and internationally about issues pertaining to empowerment of indigenous peoples; her works are cited and reprinted in hundreds of publications and her books and essays are used in classrooms across the world.

Her lineage is well-documented in multiple tribal records. Her great, great, great grandfather signed the Treaty of Dancing Rabbit Creek. His son, Charles Wilson, served as a Choctaw lighthorseman as well as sheriff and treasurer of Sugar Loaf County in Mushulatubbee District of the Choctaw Nation. His murder in 1884 is documented in Choctaw Crime and Punishment and Roads of my Relations. Her great grandfather, Thomas Abbott, created the blueprints for the town of McAlester, Oklahoma and served as its first mayor; his son, Thomas, served as Chief of Police. They are chronicled in “‘Gentleman’ Tom Abbott: Middleweight Champion of the Southwest,” Chronicles of Oklahoma 68 (Spring 1990). Her father, Thomas was an alumnus of University of Oklahoma, a sprinter, and a pharmacist. Her mother Olyve Hallmark Abbott is a professional opera singer, a graduate of Julliard, a genealogist and the author of numerous books focusing on haunted places in Texas.

Mihesuah has been a lifeguard, distance runner, musher, skijorer, gun salesperson, line cook, high school biology and physics teacher, swimming, basketball, cross country and tennis coach, and holds a black belt in Tae Kwon Do. She was the first female athlete to receive an athletic scholarship under Title IX at the D1 NCAA institution TCU. She is an avid gardener and food photographer. She lives in Baldwin City with her husband Joshua Mihesuah, a former university administrator. His family is chronicled in First to Fight: The Story of Henry Mihesuah. Her son Toshaway is a graduate student at the University of Arizona and daughter Ariana is a graduate of Kansas State University.